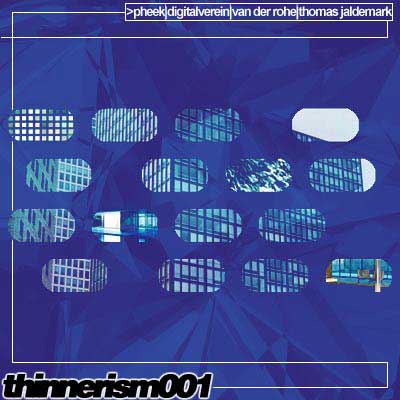 "Thinner" is a German electronic music netlabel [http://www.thinnerism.com] that distributes free MP3 files since 2001. Our service is to distribute good electronic music across the world. You're invited to download every Thinner release from this Website and spread the music.

This compilation brings together the first ten releases from Thinner in one place.

Here it goes, Thinner brings you 4 tracks within 28 minutes of playing time from 4 different artists. The genre of these tracks is quite varying but be sure that all are related to techno in its own way. The purpose behind this 4 tracker is to introduce you to the spectrum of audio fidelity Thinner likes to provide you with. All tracks are quite decent and guarantee lots of listening fun if you like tracks which can tell stories.

The swedish mediastudent and Thinner co-org Thomas Jaldemark adds a clicktechno piece which is inspired by the quite new click&cuts sound, in this case from the latest Mille Plateaux releases. Thomas says, the track "describes policemen driving on the highway while digging the track in the car hifi" - very minimalistic and clicky in it's architecture this arrangement appears to be recommendable monotone hisspop.

Finally Joerg Schuster aka Digitalverein, from Dortmund, Germany, concludes the ep with a pretty laidback dubtechno tune. Quite a romantic track it is, with lots of delays and flanges. Its a perfect description of a pittoresque landscape covered within a urban instruzialized city. A modern piece of music - a sensual enjoyment is guaranteed.

"Sun Spots" starts out with string dots which probably gave the track its name. They last for the whole track and creates a sunny laidback feeling. The groovy techhouse beat, later on shuffled with rides, emphasizes the relaxed flow.

"Drift" is a similar easier techhouse stomper with nice groove and the closed hihat shuffles on a slightly distorted bassdrum. The b-side track, "What's Dub", is a heavy filtered dubtechno track, with dusty filter sweeps and a cowbell as companion. Strongly up- and downbuilding all the time it erupts like a volcano with a ride who blows to the subtle marching bassdrum. What's dub? - it's really seething.

Curse is a part of the danish technoscene around heads like Bo V, Christian Bloch and knows them since years. Coproductions between them have been produced and solo-curse tracks ended up in releases on the danish Aalborg.dk label aswell as the current "Swedish Sauna EP" which is out on Armalyte and free to get at the record dealer you trust :). He also has upcoming releases on Physical Soul and Funque Droppings.

His latest work, "Resolved EP", is a thinner exclusive and features 2 soapdub textures in the 4/4 outfit.

The A-side track "Most Of Here" starts with spiral strings dived in deep hall textures. Accompanied by the marching bassdrum they unfold as cold and flashy icicles. A straight, yet subtle bassdrum melts with the aquatic circulation. Reducted hihats and halled claps round up this track.

The B-side "Veja Due" comes up with classical dub-delayreductions amongst maritime string loops and layers. Curse builds a relaxed atmosphere in this track. The loops sink in the water and glide over the far away sonic horizont.

Unlikely you can hear Curse liking Basic Channel though this ep has its very own character for me. I keep the term "soapdub" in mind - Go dive!

Our fifth release comes from Rktic, the latest project of rp (for those who don't know him, he has released a few EP's together with Stereo Jack on Uptide, a project with numerous releases on Superstition Records, also running the netlabel Rohformat [former Schleudertrauma], part of the demogroup Farb-Rausch... expect a new 12" these days on another famous german techno label). His tracks are a little bit like a mixture of basic channel, monolake and cologne tracks but still provide their own style. The release is compliant with any CD burner and impacts the best way listened at complete darkness. To make sure you don't loose your fine CD we recommend to download and print the covers for your brandnew cd. In Addition to that you may choose a desktop background picture for a resolution of your taste.

The 70 minute journey begins with the short intro "Geiger Radio". There isn't much to say about it so we begin with the track "Spaces In Spaces". Chilly pads, weird sounds makes this a lovely soundscape, drums are added gradually and makes this 15½ minute long track a nice and soft journey. Very impressing!

Next track is "Riding The Pipeline" that begins with reverbed industry noises, bassdrum and some bass. More drums are added gradually and the delayed "stabs" is excellent. It feels like you are standing at the tundra near a factory and listening to the track.

The fourth track, "the Opposite of" begins with a sneaking bassline that becomes stronger and stronger, fx builds upp the feeling of the track and after some time the bassdrum and other drums arrives. The bassline continues to filters up and down. Another great track!

The next track, all 14 minutes of it, "A walk on deep snow", is a journey with beautiful pad, lovely bassounds and lovely delayed fx. Its definatly one of the best tracks i've heard in a long time! It's hard to describe how it sounds but its overwhelming good.

The sixth and the last track is also the longest. 20 minutes and 42 seconds long! The track is called "Evolving North" and its recorded live! It contains clicks, pads, drums, fx. Pretty hard to describe the track but its fits very good into this album!

The whole album has everything you want... clicky stuff, spacy stuff, cold stuff, chilly stuff... The title of the album really fits, this is really the "Northern Lights".

Finally we release a new ep again! We signed an uprising talent from Switzerland called Benfay for two eps and this is his debut called "Carbon EP".

3 cuts with lots of different flavours inside: moody modulated house organs, deep basslines and atmospheric filterworks aswell as clicky effectpaintings merged with shuffled banging kickdrums. If you are into the sound of the Kanzleramt label this is a definitive checkout!

The german artist Dolby introduces this year for thinner with a dark, yet sinister dubtech 4tracker. "he0R" is a slowly rising gem of seething dark techno. "M1" leads to the classic German school of Basic Channel and shows how minimal decent dubby tracks can be. the 12 minute long epic "X09" merges experiments of widely reverbed dark fx with familiar structures until it reveals relaxed modulated filtered chordpatterns. "Outward" is THE experimental choon of this ep with lush crunching wooden knocks grinding onto an almost rubbed out rhythm surface. Enjoy 34 minutes of advanced dark surprising dubtech architextures made perfect for secluded afterhours with candles burning on the shelves.

After 9 very successful releases we go back to the roots and start a new batch of releases with a compilation featuring various artists. Through the past months many artists contacted us for releasing their material on Thinner. We now compiled a sampler which features uprising artists who probably are soon to be found on Thinner with own eps. Enjoy 46 minutes of new sophisticated sounds from The thinner collective.

The compilation starts with a pretty lounged new Benfay work, unlike the "Carbon" ep which was the yet most banging Thinner release, "Smokey" is a very relaxed piece of mellow fusion techhouse with moody moments. The latvian talent Selffish from the fairly new baltic independent record label "+371 Records" submitted an atmospheric idm-dsp fusion masterpiece. A trippy 10 minutes voyage with smooth layers folding and unfolding. The australian Chimera of hellven (soon a LP on Tim Kochs excellent Surgery records) gave us an intelligent grooving microhouse cut with weird voices and blips, in soft Akufen style. My debut as Sebastian Redenz on Thinner is a monotonic techhouse song covered in string-o-mania ;). Sub.q collaborated with Th0ke for a deep groovy minimal techno cut with deep filtered hook sequences. From finland we introduce Timo Saikkonen who submitted a dark dark atmospheric monotone minimal groover.

Reviewer: Bobstopper - favoritefavoritefavoritefavorite - October 26, 2008
Subject: Something for everyone, nobody likes it all
Very nice comp. There are many useful grooves and moods. Some just ain't my cuppa T. I wish this label had more activity, but...